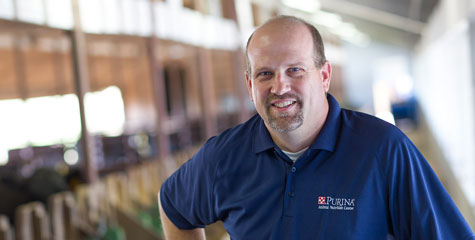 His team is also responsible for ensuring that ingredients maintain their nutrient value throughout manufacturing. “In the animal nutrition world, we’re looking at the same base components as we do in human food engineering,” says Burr, who worked on formulating breakfast cereals early in his career. “We combine proteins, carbohydrates, fiber, fats, vitamins and minerals in the same way. The biggest difference is the end user,” says Burr. “Most have four legs instead of two.”

“The highest compliment we’re paid in this industry is the fact that as soon as we launch a new product, our competitors try to mimic it,” says Burr. “We pride ourselves on the fact that we have a process research department dedicated to development and onsite manufacturing trials.”

Burr’s research expertise and interests include:

“The accomplishment I’m most proud of is designing and building the processing system for  UltraCare® Gel in pigs,” says Burr. “We had to design and build a new system around the formula and I was the engineer at the time that built the plant. Millions of pigs are alive today because of this innovation.”

Burr earned his bachelor’s and master’s degrees from the University of Nebraska-Lincoln with a specialization in processing operations.