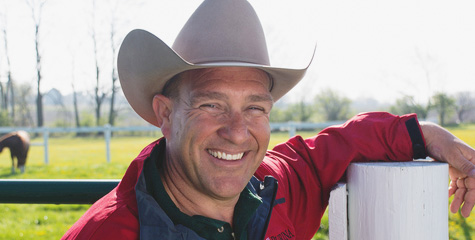 Shawn is known throughout the industry for his humility, unmatched work ethic and mischievous grin. Shawn began his career as a youth, and knew from a very early age what he wanted to do when he grew up. When he graduated from high school in 1988, Shawn went to work for his brother, Mike Flarida, who was already a successful NRHA professional. In 1989, Shawn branched out on his own, "I had eight clients," Shawn said of his start in the horse training business. "I barely eked out a living, but I never doubted it was what I was meant to do!" Shawn won his first NRHA Open futurity championship in 2002 aboard Wimpys Little Step. This win came just a few months after he also won the first two World Equestrian Games gold medals presented in reining at the WEG in Jerez, Spain. Shawn hasn’t looked back, and has strung together an unmatched series of wins over the last decade.

In the 2007 NRHA Open Futurity, Shawn rode Wimpys Little Chic in the 2007 NRHA Open Futurity. Shawn and Wimpys Little Chic continued their dominance of NRHA major events when the palomino mare became the first horse in NRHA history to win NRHA’s unofficial “triple crown” – winning the 2008 NRBC and NRHA Derby in the year following her futurity championship. Shawn continued to show the mare as a five and six year old, building her up to the title of NRHA’s all-time money earner with over $500,000 in NRHA earnings.

Shawn married his high school sweetheart, Michele in 1992. The couple now have three children, Cody, Courtney, and Sam, all of whom share his interest in the equine industry.