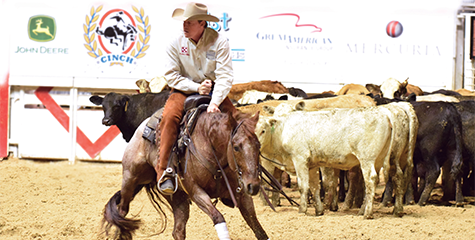 Kory Pounds is a wildly successful cutting horse trainer who grew up in Lubbock County, Texas on a cotton farm. Kory began training horses in middle school and hasn't stopped since. At age 14, Kory moved to Clarendon, TX with a family that ranched a sizeable cow herd. On top of working cattle, Pounds also began riding bulls. It was at a rodeo that Kory was offered a position with a rodeo company where he began training horses that weren't rank enough for rough stock.

From a young age, Kory worked hard training horses and running cattle. His life's path led him to the famous cutter, Buster Welch. Buster invited Kory to work on his ranch and train cutting horses. After four years at Buster's ranch, Kory went on to work for Gary Bellenfant and train horses.

In 1999, Kory went in to business for himself. He then worked for Frank and Ora Diehl from 2004 to 2006. Shortly after he met his wife, Jessica. The couple married in 2008. Now, the two live on a ranch in Weatherford, Texas. He trains open horses and coaches non-pros.