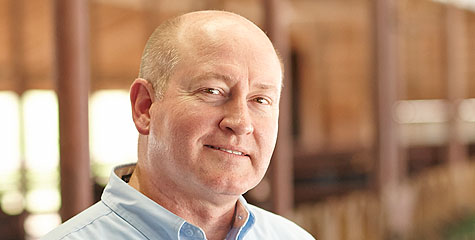 Ron Scott eats, sleeps and breathes cattle nutrition. Before his first cup of coffee, he’s already considered the profitability of cattle production and how to make it better.

At the Farm, Ron focuses on the discovery, development and deployment of new technology in the beef industry. There, he and his team design, conduct and interpret cattle nutrition studies. The result? New cattle products that help cattlemen sustain their way of life. His team is also on the frontline for product maintenance, sales team training and producer education.

His greatest goal for cattle producers? One hundred percent conception rate for all cows on the first service. Although lofty, Ron’s team works towards it every day.

Ron grew up on a diversified livestock operation and earned his master’s degree and Ph.D. in ruminant nutrition from Oklahoma State University. He joined Purina in 1992 and has dedicated his life to solving challenges and bettering the cattle industry.