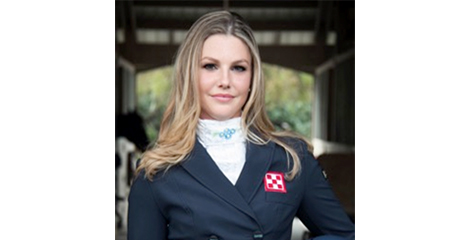 Meagan began riding when she was just five years old. By age seven, she had her mind set on riding dressage and was soon participating in local schooling shows. It soon became clear that Meagan was to be a dedicated rider and competitor and to help pay for her lessons she began working at the barn after school.

In 2002, Meagan competed at the America's Cup, in the FEI Pony Division in Blainville, Quebec. Then at 11 years old, Meagan earned the distinction of being the youngest rider to represent the USA in International competition. To prepare for this competition, she began training with Lendon Gray, who ultimately trained and mentored Meagan through the FEI Junior and Young Rider levels.

In 2010, Meagan competed in the Young Rider World Cup in Frankfurt, Germany. Meagan was the only US rider to finish in the "A" Final, where she placed 7th. After competing in the World Cup, Meagan spent two months training with Hubertus Schmidt.

Meagan continues showing at the National and International level and has earned her Bronze, Silver and Gold USDF Medals. Meagan brought several horses to the highest levels of the sport and is currently campaigning "Royale," an 11-year-old Oldenburg gelding, being shown in the CDI Intermediarre 1.

When not competing, Meagan enjoys training and teaching at her Loxahatchee, Florida facility in the winter season then back in Stone Ridge, NY for the summer.