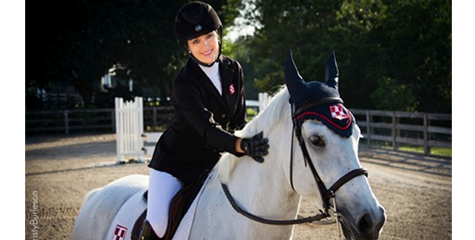 Heather Caristo-Williams grew up riding with her parents, Ralph & Holly Caristo, at their barn, Glenview, in New York. Heather's career began early as she won the lead line at Devon Horse Show at just four years old. "I don't ever remember not showing," Heather said. She attributes her parents' support and good judgement in finding her the right horses to boost her through the ranks and pursue her passion.

Heather's most memorable moment was her first Grand Prix win at age 16. She rode an off-the-track thoroughbred, Cliffhanger, who was purchased from her idol and fellow Purina ambassador, Todd Minikus. Cliffhanger took Heather from the children's jumpers to the Grand Prix level. Since, Heather has been a National Hunter Champion five times and has been a champion at every major show on the east coast.

Heather won gold medals for multiple young riders teams which fueled her desire to be a part of the senior teams. In 2016, Heather's hard work paid off whenshe competedinternationally for the United States on the Nations Cup team.

"I love working with horses! There's a special bond formed as I train with them each day. To feel them respond by really trying for me in the show ring  makes it all worth it.  I love the sport because now more than ever, it's a sport of inches. It's technical, it's strategic, it's big jumps & fast riders. It's a challenge every day & keeps me striving to be better as a rider & a trainer. Having Purina fueling my horses assures me that I have the best possible nutrition & that gives them the edge that can have them at their best!"