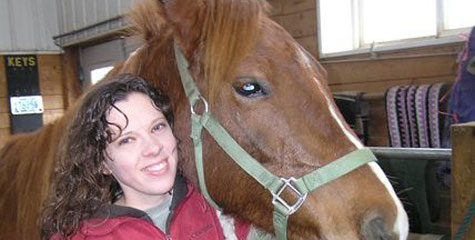 I finally realized my childhood dream of owning a horse at age 32, says Aga. I will always be involved with animals, and I am very fortunate to have a job that connects me to them every day.

Aga also works with the regulatory and quality departments to ensure that feeds are properly manufactured and labeled per FDA and USDA requirements.

“I have known since the time I was three years old that I wanted to spend my life around animals,” says Aga. “Working for one of the largest animal feed companies in the world allows me to fulfill my childhood dream of being involved with animals on a daily basis. My position is both challenging and rewarding, and I get to work with animals and people from all around the U.S.”

Aga’s research areas of expertise and interests include:

“My role supports our greatest accomplishment as a feed company – coming up with new and innovative ways to feed cattle in an ever-changing world and providing those feeds across the country,” says Aga.

Aga was raised in a suburb north of Minneapolis on a small city lot, but always dreamed of owning a horse and other various livestock. Her parents knew she was crazy about animals, but it didn’t really sink in until they found her laying under a Holstein cow at a friend’s farm scratching her belly. Aga worked summers at a veterinary clinic starting at age 12, and continued on to pursue her animal interest in college. Post-college, Aga worked for a variety of small feed companies before joining Land O’Lakes in 2002 as a custom formulation specialist. Since then, she has accepted a role as a cattle nutritionist and has been in the position for about six years.

Aga earned a bachelor’s and master’s degree from the University of Minnesota.