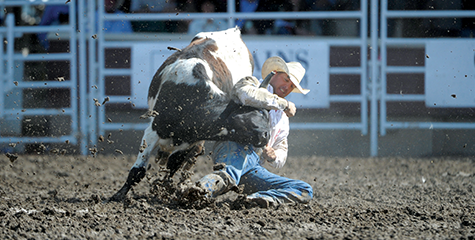 Trevor Knowles is originally from Baker City, Oregon. Trevor has competed in the Professional Rodeo Cowboys Association since 2001. Trevor runs in tie-down roping and steer wrestling. Since joining the PRCA, Knowles has earned over $1.5 million. Since 2004, Trevor has qualified 12 times for the Wrangler National Finals Rodeo and finished 2016 12th in world standings.

In 2016, Trevor placed in four rounds at the Wrangler NFR and ranked 9th in the average, won the all-around at the Cheney Rodeo in Washington, won the steer wresting at the Canby Rodeo in Oregon, Won the Sisters Rodeo in Oregon, and was the Co-Champion at the Airdrie Pro Rodeo in Alberta.

Some career highlights include:

2015: Finished 12th in world standings after placing in four rounds at the Wrangler National Finals Rodeo, winning the Caldwell Night Rodeo, the Days of '47 Rodeo, the Ram Columbia River ProRodeo Circuit Finals and the World's Oldest Rodeo in Prescott, Arizona. He won the all-around at the Sisters Rodeo.

2014: Won four rodeos, the all-around at Wild Rogue ProRodeo, co championed the Wrangelr Champions Challenge, and placed in four rounds of the Wrangler National Finals Rodeo, finishing sixth in the world with $134,406

2013:  Won seven rodeos, co champion at one, won the all-around at Sisters Rodeo and won Round 1 and placed in three other rounds, finishing sixth in the world with $137,907.

2012: Won round five of the Wrangler NFR and placed in three other rounds to finish 10th in world. He won the Livermore Rodeo, the Pikes Peak or Bust Rodeo Days, and the Norco Mounted Posse Rodeo.

2011: Won round 2 of the Wrangler NFR with a rodeo-best-equaling time of 3.3 seconds; shared wins in rounds 1 and 10 and placed in two other standings  with season earnings of $167,860. He won the Dodge National Circuit Finals Rodeo, the Eastern Oregon Livestock Show, the 51st Annual Daines Ranch Rodeo, the Wild Rogue ProRodeo, and the Walker County Fair & Rodeo with a time of 11.5 seconds on three head.

2010: Placed in six of 10 rounds at WNFR to finish fourth in the average and third in world standings with $164,494. Won three other rodeos, set an arena record of 3 seconds at the Justin Boots Championships, won the average in 6.8 seconds on two head, rode Lee Graves' horse Jessie, the 2009 AQHA Horse of the Year, earned $15,400 in Omaha, the second-most money won in steer wrestling behind final-four winner Curtis Cassidy.

Trevor prefers to feed Purina Omolene 500 and Purina Healthy Edge. "I use these feeds to give my horses the energy and fat needed to keep them at their best throughout the year."