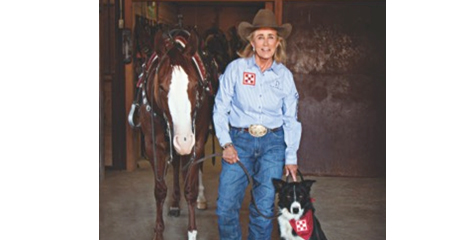 Lindy Burch began blazing trails in 1980 when she captured the National Cutting Horse Association Open Futurity Championship with a record 225.5 points on Mis Royal Mahogany. The victory was unprecedented in more ways than one, as she was the first woman in the history of the sport to win the prestigious event.

Lindy shook down the thunder once again when she marked a historic 233 at the 1998 NCHA Open World Finals - a score that was not to be topped for some 13yrs. Bet Yer Blue Boons, her mount, was a mare that Lindy had raised and trained. Three years earlier, riding another homegrown mare, Shesa Smarty Lena, she had become the first rider in history to win all four go-round of the NCHA Open World Finals.

Raised in Chino, California, Lindy grew up riding a horse the way most kids ride bikes. As a teenager, she competed in gymkhana events and got her first taste of cutting with a local trainer, who taught her the mechanics of the sport.

Intent on a career in veterinary medicine, Burch majored in zoology at UCLA and received her master's degree in endocrinology. While studying for her doctorate, she began competing in local cutting events and soon found herself with a small stable of show horses, including Diamond Mystery, the horse she rode to Reserve Champion of the 1979 NCHA Open Futurity.

While she was showing Diamond Mystery, Lindy conducted a cutting clinic for the staff of the Oxbow Ranch, owned by Dan Lufkin, cofounder of the famous Wall Street firm of Donaldson, Lufkin & Jenerette. Lindy & Lufkin ultimately formed a partnership that saw Oxbow Ranch become a leader among cutting horse owners and breeders.

By the late 1980's, with 170 horses under her direction, Lindy was dividing her time between the Oxbow Ranch in Carmel, California and Oxbow South in Weatherford, Texas. Then in 1995, with the goal of focusing on a small, elite group of broodmares, including Bet Yer Blue Boons, and their offspring, Lindy designed and built her own facility in Weatherford.

Ranked among cutting's All-Time leading money earners, with over $3.6 million earned to date, Lindy has not missed an NCHA Futurity since she first performed at Fort Worth in 1978 and has been an Open Finalist or Semi Finalist most years.

"In my program, I attempt to control many variables that exist in breeding, training and showing cutting horses. I feed Purina feeds exclusively so I don't have to worry about my feeding program. I use Purina's years of research and knowledge so I'm confident I'm doing the very best I can for my horses and check off that all-important variable which gives me peace of mind. Feeding Purina is like having a nutrition expert on my payroll."