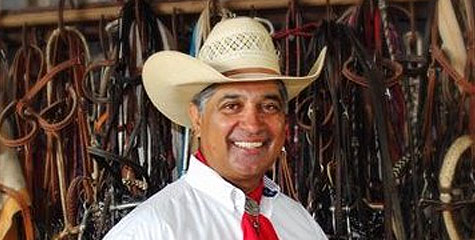 Gerardo "Jerry" Diaz represents the world of Mexican horsemanship and rodeo. He is a true charro (pronounced Cha 'ro). Charros developed customs, dress, music and equestrian skills later borrowed by the American cowboy and are skilled in horsemanship, bull riding, horse and steer roping and trick roping. A native of San Antonio, Texas, Diaz traces his charro roots back four generations and is recognized among the most skilled professional riders in the world.

Diaz makes his living following the grand tradition of this heritage in Mexico. Diaz started his charro career in the early 1980s. He performs his specialty act at rodeos around the country and produces his own Mexican Rodeo Extravaganza. The charro's strict code of honor includes chivalry, high ethics, expert horsemanship and dedication to family and charro traditions.

Diaz has earned the Federation of Charros' Golden Spur Award for his outstanding contributions and commitment to the charro tradition. Famed for his expertise with the maguey rope, Diaz is a crowd pleaser. Unaided by swivels or gimmicks, he spins the rope with ease while on foot, riding or standing atop his horse. Diaz has been recognized as a U.S. super star and has appeared on PBS's National Education Services, on ABC's Good Morning America and on numerous programs on Telemundo and Univision. He's been written up in the AQHA Journal, Time and Newsweek. Diaz is one of 100 performers to be inducted into the "Trail of Fame.” Diaz also is an accomplished singer and recording artist and has released a compact disk titled “Charro de Corazon” (Charro from the Heart).