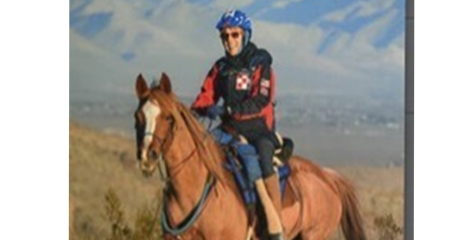 Becky Hart has been involved in endurance racing since 1974.  Since then, she has moved up through the ranks and become one of the most successful competitors in the world.

Through over 21,000 miles of competition, Becky has won both the prestigious Tevis Cup and Race of Champions rides twice.  She has twice been AERC National Champion and North American Champion.  Becky is the only rider to have won the FEI World Endurance Championship three consecutive times. Becky’s endurance accomplishments have resulted in being inducted to the AERC Hall of Fame, along with two of her horses. She was also the recipient of the Hertz/USET Equestrian of the Year, and Chronicle of the Horse – Overall Horseman of the Year. Becky gained a wide range of experience came from being a Pony Club member and competitor in English and Western pleasure, equitation, trail, saddle seat and jumping, and student at Potomac Horse Center in Maryland. She is now is a level three Centered Riding ® instructor. In addition to Centered Riding, she teaches natural style riding and ground work and offers Centered Riding and endurance clinics.In addition to teaching and riding, Becky has served on the AERC Board of Directors, USEF Board of Trustees, was an FEI 3-star judge and has coached and taught world nominated endurance riders for USEF.  She was the Chef d’Equipe for the United States Endurance Team from 2008 to 2010.

Becky is now competing on her new horse, Angel, with a goal of competing in the prestigious Tevis Cup 100 Ride on August 5, 2017.