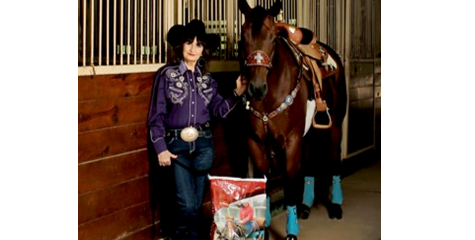 R.E. Josey, three-time AQHA World Champion Calf Roper, left his mark on the world by winning his prestigious titles on three different horses; Major Chalfant in 1970, Toesbars in 1972, and Silver Creek Jak in 1974. Together with top instructor Jeb Barney, R.E. produced a series of video tapes designed to take calf roper "back to the basics" by teachings the foundation necessary for beginners and the essentials for serious competitors headed for a win.

WPRA, AQHA, and NBHA World Champion, Martha Josey, has continued her legendary career on many horses, reflecting her keen training and horsemanship ability. Martha is an inductee in the Texas Cowboy Hall of Fame, the National Cowgirl Hall of Fame, the Texas Rodeo Hall of Fame, and the Ark-La-Texas Sports Museum. She has developed two training books and DVDs to share her experiences and expertise that have developed over 53 years of rodeoing.

Beginning in 1964 on her gelding, Cebe Reed, the explosive pair won seven horse trailers and 52 barrel races in  a row. Cebe qualified Martha for her first National Finals Rodeo in 1968 and again in 1969. Martha then began riding Sonny Bit O'Broth, who ran her all the way to the NFR four years in a row.  In 1980, Sonny won both the AQHA and WPRA world championships, setting a record which has yet to be broken. Martha's success continued to grow rapidly.

In 1987, Martha's horse, Swen Sir Bug (J.C.) was her partner through the 1988 Winter Olympics in Calgary, Canada where the pair won an Olympic medal. Martha continued to win tremendously through 2003.

R.E. and Martha combined their amazing amount of experience and success to host clinics and trainings specializing in world champion barrel racing, horsemanship and calf roping at their Josey Ranch in Marshall, TX. The couple also train and sell barrel horses. More impressively, they host the Josey Jr. World Championship Barrel Race for youth age 20 and under, and the Josey Reunion Round Up which is open to all former Josey students. They also have a western store called Josey Western Store.

Learn more about this spectacular couple at www.barrelracers.com