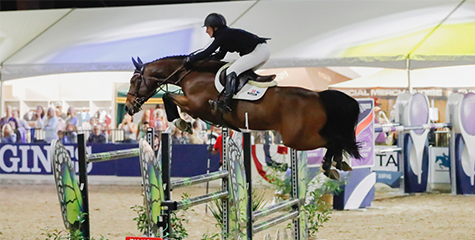 Mandy Porter is a show jumping professional based in San Diego, California. She has appeared on three Nations Cup teams for the United States and has competed in three FEI World Cup Jumping Finals. She currently specializes in developing young horses to the grand prix level and competing in international and national grand prix classes.

Mandy’s extraordinary qualities were recognized early on by both her trainers and peers. Growing up in Northern California, Mandy began her formal training with various professional horsemen such as Carol Dean Porter, Lowrey Jones, and, later, Butch and Lu Thomas.

She demonstrated pure talent and guts from the start–qualities that would later propel her into the International Grand Prix scene. During her junior years, Mandy competed in the Maclay Finals, won the NorCal Finals, placed 2nd in the CPHA Finals, and rode on the 1984 bronze medal winning North American Young Riders Championship team.

Mandy’s desire to jump big quickly led her to the grand prix level, competing in her first grand prix events while simultaneously attending college at Cal Poly San Luis Obispo. After earning degrees in animal science and agricultural business management, she decided to focus her energy on her promising riding career.

In 1992, after working for two years for Butch and Lu Thomas in California, Mandy made a decisive move to Europe. Over the next seven years, first working for Gerhard Etter’s sale enterprise in Switzerland and then as a private trainer in Italy, Mandy gained invaluable international experience that allowed her to polish her talents as both a rider and an instructor.

She rode in numerous international competitions throughout Europe and represented the United States on three Nations Cup teams in Linz, Austria, La Baule, France, and Gijon, Spain. She also had the opportunity to learn from, and ride with, many international level show jumpers, including Katie Monahan Prudent, Alison Firestone, Alice Debany, and Peter Wylde. In 1999, Mandy closed the European chapter of her life and returned to the states.

Excited to come home to the West Coast, Mandy quickly established her own venture, ACP Enterprises, Inc., in the beautiful seaside community of Del Mar, California. Since starting her own business, Mandy has successfully campaigned Barb Ellison's (Wild Turkey Farm) breeding stallions and successfully rode the grey Holsteiner mare Summer, also owned by Ellison, to many wins during their six-year partnership including the PCHA Grand Prix Horse of the Year title in 2006. In 2009, Mandy made her third trip to the World Cup Finals with Danielle Korsh’s Dutch gelding, San Diego.

Through the following years, Mandy continued to find success in the grand prix arena aboard horses like Con Capilot, Chesapeake, Capital One, and Milano (to name a few). And in 2016, she welcomed both young prospects (Wild Turkey Farm's WT Ca-Pow! and WT Leapfrog) and seasoned veterans (Coral Reef Follow Me II) to her string to develop and to compete.

On the ground as a sought-after instructor, Mandy has guided numerous riders to major victories, including Megan Ellison, Morgan Taylor, and Taylor Coe, participants of the North American Young Rider Championships.

As owner and trainer of ACP Enterprises, Mandy successfully manages all aspects of the elite show barn. Small by design and focused exclusively on show jumping, ACP offers each competitor unmatched personal attention in both training and care. The first-class program allows Mandy the opportunity to coach a limited number of riders, train a select group of horses, while personally competing at the highest level of the sport in the Grand Prix ring. She also continues to develop and show several talented young Grand Prix horses.

With each Grand Prix win and top placing, Mandy regularly adds accomplishments to her already impressive resume. Mandy’s dedication, consistency and knack for knowing her horses has put this California horsewoman on the map as one of the top show jumpers on the West Coast.
Kerry Kuhn
Luke Branquinho
Clint Summers
Jake Long