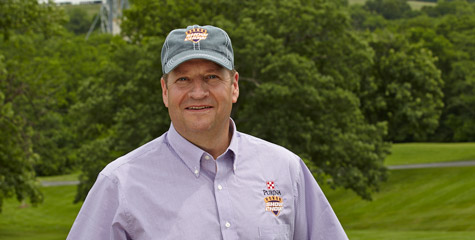 You gotta put something in to get something out. It's not the big amount of work that you put in right before the show but the little bit you do ALL the time that matters. IF it's got hair and a heartbeat then we think it needs to be clipped.

When it comes to showing cattle, you won't find more experience and showmanship knowledge than Kirk Stierwalt.

In 2001, Kirk became the first Honor® Show Ambassador. For more than 10 years, Kirk has led events and workshops across the nation to help youths succeed in the show community.

"There is no other feed company that has the ambassador program like Purina," Kirk said. "We believe in the products, and I can't imagine feeding anything else. They're my Purina family. I love my job. I love what I get to do."

Kirk grew up in Southern Iowa, where his parents ran a retail business. He began showing with his granddad, and at just 6-years-old, Kirk clipped his first calf. He showed cattle in 4-H and eventually went on to study Animal Science at Iowa State University.

Kirk got his big break in 1981 when he clipped a grand steer at the National Western Stock Show. Since then, Kirk has worked with cattle breeders across the country. Currently, Kirk operates Stierwalt Cattle and Clinics, which he established in 1987. He travels across the U.S. helping everyone from first year individuals to a competitive showers on feeding their animals, animal management, showmanship, clipping, fitting, daily hair care, overall troubleshooting and general care.

Kirk and his wife, Juli, have two children, Ky, 21, and Kyra, 18, who spent many successful years showing cattle and lambs. Ky is primarily all cattle, and Kyra, a professional barrel racer with the Women's Pro Rodeo Association, shows cattle and spent time showing lambs.

"Our whole family is a very close, working unit," Kirk said. "Everyone participates in the work or activities we do for leisure. We're a true family run operation."

"They've been very fortunate to do as well as they have," Kirk said. "Ky is the only kid to show the Grand National in all three nationals - American Royal (KC), North American (Louisville), National Western (Denver)."

For Kirk, showing cattle teaches responsibility, work ethics and how to handle disappointment along with success.

"Showing teaches you the meaning of words like commitment, responsibility and integrity," Kirk said. "Showing helps kids and families bond and work on their social skills. It's an activity that the whole family can do together."

Kirk has dedicated his life to providing education for show industry enthusiasts and recommends asking questions of anyone that is willing to help.

"Look to someone that you respect and tap into their research and mindset," Kirk said. "They can become a very valuable resource."