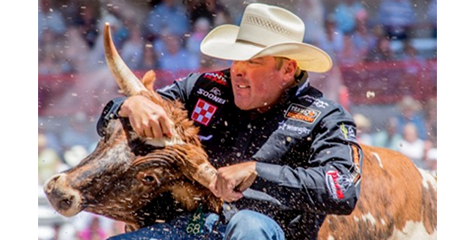 Having been in professional rodeo for over 20 years, steer wrestler KC Jones has been involved in the sport since his childhood. KC has made it to the Wrangler National Finals Rodeo nine times and earned over $1.37 million since receiving his pro card in 1995. KC was born in La Junta, Colorado and now lives in Decatur, Texas. Among traveling to rodeos, KC has started two other very successful businesses: Rodeo Vegas (the WNFR After Party of the PRCA) and Pro Fantasy Rodeo (the official fantasy rodeo game of the PRCA and WNFR). KC's wife Gayle, a barrel racer, devotes a lot of her time to help KC with the horses and supporting him through all his career endeavors.

Some career highlights include: