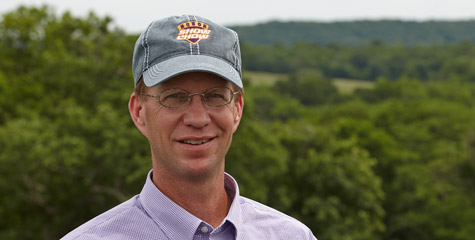 Good luck is the residue of hard work.

With more than 35 years of showing and raising show cattle and decades of show wins, Purina Honor® Show Chow® Ambassador, Dave Allan is an expert in and out of the show ring.

As an Honor® Show Chow® Ambassador, Dave has judged at every major stock show in the U.S. and several in Canada. He will judge and instruct clinics as much as four times a month.

"It is very rewarding putting on the clinics because I am able to share the information that took me many years to obtain. It is great to run into some of the families at shows that attended the clinics and receive positive feedback," Dave said. "I have fed Purina ®  Honor® Show Chow® feed for a good while, and I am a believer. It is the most consistent feed I have ever fed, and the results on our cattle have been tremendous. We use the products on our sale cattle as well and have been very pleased with the results."

From the moment Dave started showing heifers, he was hooked. In 2011, Dave raised the Champion Steer at the Houston Stock Show. He has had 10 National Champions representing three different breeds, Herdsman of the Year for both the Hereford and Limousin Breeds. However, Dave believes the real highlights have been watching his sons show and have success.

For Dave and his wife, Becky, showing animals will continue to be a family affair with their sons, Tyler, 12, Mason, 8, and Landry, 8 months.

After receiving his Bachelors in Animal Science from Texas A&M University, where he was on the livestock judging team, Dave went on to earn his Masters at Michigan State University, where he helped coach the judging team and assisted at the beef center. From there, Dave managed various cattle operations or worked on show cattle but his goal was to one day to have his own operation. Ten years ago, that goal came true and Dave is the owner/manager of Bar A Cattle Co., a cow-calf operation specializing in show steers and heifers.

"Selection and nutrition are the two most important parts of a show cattle program," Dave said. "No matter how much hair your cattle has and how well you groom and show your cattle, if you don't have the right genetics and nutrition you won't get it done. To be successful you need to work extremely hard at it and always be willing to learn and never be afraid to ask questions."