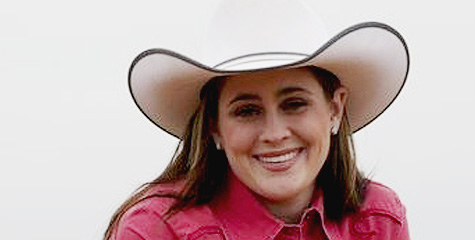 Brittany Pozzi of Victoria, Texas knows her way around the barrels as an accomplished western barrel racing champion.

In 2013, Brittany placed 12th in the World Standings, the Wrangler National Finals Rodeo and gleaned an annual earnings of $113,156.  This great year contributed significantly to her career earnings of $1.8 million, and two world titles in 2007 and 2009.

Brittany also holds two Wrangler NFR average titles and has qualified for the Wrangler NFL 10 times, first in 2003, and then nine consecutive years from 2005 to 2013.

Trained by her father, Randy, Brittany took to the rodeo circuit with nearly immediate success.  In 2003, she was the first rookie to qualify first in the standings and set an arena record at the Iowa Championship Rodeo. In 2004, she finished 20th in the world standings, and moved up to 10th place by the end of 2005.

In 2007 Brittany won the average title at the NFR with a time of 140.18 seconds on 10 runs to earn her first world championship and break the single-season record with earnings of $259,713.

In 2008, she came back to place in five out of 10 rounds, winning the fourth and fifth rounds with times of 13.84 and 13.80 respectively – the first she had ever won a round at the Wrangler NFR.

Partnering with her in this success are her horses Yeah He’s Firen “Duke”, a 10-year-old palomino gelding and She’s Free to Flame “Teddy”, a 6-year-old mare.