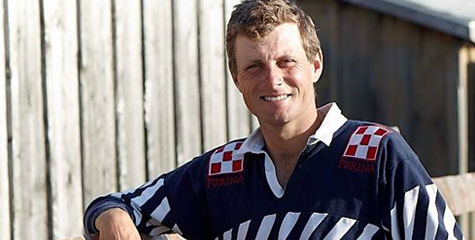 One of the leading eventers today, Boyd Martin was the top-placing US rider at both the 2014 Alltech FEI World Equestrian Gaes in Normandy, France riding Shamwari 4, and the 2010 WEG in Lexington, riding Neville Bardos. He was also a member of the 2012 US Olympic Eventing Team riding Blackfoot Mystery.

Boyd was born August 20, 1979 in Australia. He and his wife Silva, a Grand Prix dressage rider, own and operate Windurra USA in Cochranville, PA. During the winter they are based at Stable View Farm in Aiken, SC. They are parents to Nox, who was born in 2015.

The son of two winter Olympians, Toy Dorgan (USA) and Ross Martin (AUS), Boyd grew up in Australia and moved to the US to pursue his dreams of international competition. He has enjoyed great competitive success, finishing in the top ten at ever four-star in the world except one. Boyd currently has a string of talented four-star horses including Blackfoot Mystery, owned by the Blackfoot Mystery Syndicate; Welcome Shadow, owned by Gloria Callen; and Crackerjack, owned by Lucy Boynton Lie; and Steady Eddie, owned by George and Gretchen Wintersteen, Denise Lahey and Pierre Colin.