Print
When the majority or even an entire population of fish in a fish culture system die suddenly, the cause is usually an acute environmental stress.

The most common cause of fish kill is probably depletion of dissolved oxygen (D.O.). Depletion of D.O. may occur due to several factors and often is predictable. Emergency aeration should always be available for intensive fish culture systems. Some common causes of oxygen depletion include: Dense phytoplankton blooms may die at once (crash), especially when there is an extended period of low light due to clouds. Some people also mistakenly treat ponds with algaecides during phytoplankton blooms. A sudden crash of a phytoplankton bloom will result in an oxygen depletion because of bacterial decomposition of the organic matter (from the phytoplankton). The decomposition often uses all of the available oxygen.

Sufficient supplemental oxygen must be supplied at times of peak oxygen demand. The most common time in ponds is when the water is warm and the fish are densely stocked. The phytoplankton use oxygen at night, which often leads to dangerously low D.O. concentrations during the night and early morning. Supplemental aeration should be added to ponds when this condition exists. The supplemental aeration should be enough to maintain D.O. within safe levels.

Pond turnover may occur at any time of the year. However, one of the most common times is in late summer, when the water is very warm and oxygen demand is already high. Turnover is often caused by a sudden cooling of weather and a cold rain that cools the water close to the surface. The cool water on top is more dense than the warmer water below, causing the pond to turn over. Turnover often releases anoxic water from the bottom, which causes a lack of oxygen throughout the pond.

Additionally, noxious gases, such as Hydrogen Sulfide, are sometimes liberated from the bottom. Some fish culture systems rely entirely on supplemental aeration or oxygenation to supply D.O. Many tank and recirculating systems are stocked so densely that the fish within those systems will begin to die from asphyxiation within minutes of a systems failure. Any system that depends on supplemental aeration or oxygenation should have a monitoring system that will sound an alarm in the event of a system failure.

The first sign of a problem is often a sudden decrease in appetite. If a group of fish suddenly quits eating, the cause is usually either an adverse water quality condition or disease. First, check water quality. If a water quality problem exists, rectify the problem. If fish appear unhealthy in any way (improper or erratic behavior, sores, etc.), they may be diseased. Send unhealthy-appearing fish to a pathologist for evaluation.

Poor water quality can be another reason behind fish kill. Fish are entirely dependent on the water in which they live and water quality often determines the success of raising fish. Many factors affect water quality. Among them are D.O., ammonia, nitrite and temperature.

D.O. is the amount of oxygen present in water. The required D.O. level, which should be maintained, is dependent on fish species. In the event of dangerously low D.O. concentrations, fish often come to the water surface and gulp air because the D.O. is greatest at the air-water surface. When a period of dangerously low D.O. occurs, DO NOT FEED. Take action immediately to increase the D.O. to desired concentrations by emergency aeration, oxygenation or flushing with good quality (high D.O.) water.

Fish excrete nitrogen as ammonia. Ammonia exists in two forms, ionized (NH4+) and non-ionized (NH3). Non-ionized ammonia is extremely toxic to fish. Ammonia is measured by chemical assay as total ammonia (both ionized and non-ionized). The amount of total ammonia present as the toxic non-ionized ammonia is dependent on water temperature and pH and may be derived from a table. Ammonia is oxidized by bacteria in the fish culture system to nitrite. Nitrite (NO2) is toxic to fish because it binds hemoglobin and prevents the uptake of oxygen.

Acute Nitrite (NO2) toxicity causes fish blood to turn a chocolate brown color. If a dangerously elevated Nitrite (NO2) level exists, DO NOT FEED. A water flush of the system may be done if nitrite-free fresh water is available.

Fish are cold-blooded animals and their body temperature is dictated by the water temperature. Tolerable temperature ranges and optimum temperature for growth are dependent on the species of fish grown. These numbers are guidelines only and may vary between different strains of the same species.
Article
Four Tips to Establish a Healthy Pond
Article
Harvest to Maintain Pond Balance
Article
How to Stock a Pond
Article
Pond Stocking Considerations 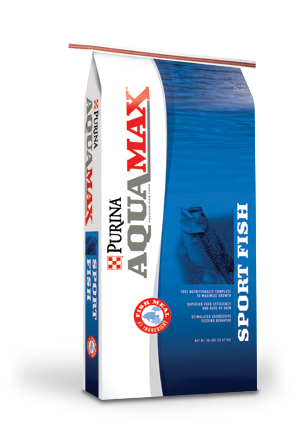